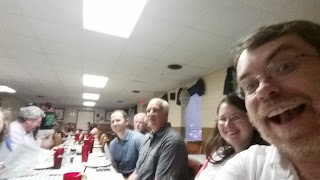 I'm in Dickson, TN this week for the Is Genesis History? conference with a bunch of folks featured in the movie.  I'll be giving ten presentations (no kidding), and if you follow the IGH Facebook page, you'll be able to see me streamed live.  I'll be doing "Intro to Creation Biology" at 4 pm CENTRAL time on Monday (5 pm EASTERN) and then a little testimony on Thursday at 8:30 am central (9:30 eastern).  Also on Thursday at 1 pm (2 pm eastern), I'm doing a newer talk called "The Quest: Creationism in the 21st Century," which I'm really excited about.  Then at 2 pm (3 pm eastern), I'll be talking about the human fossil record.  Check out the IGH website for more info on the streaming schedule.  If you can only stream one talk, do "The Quest" at 1 pm (2 pm eastern) on Thursday.

There's a lot more from the conference that will be available later.  I'll also post a few impressions from each day as we go along.