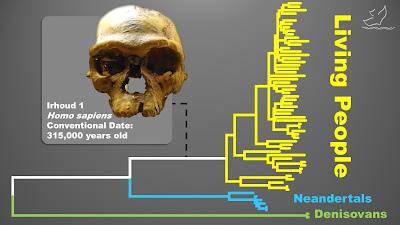 Headlines once again tell us that fossil discoveries require us to rewrite the history of humanity.  Once again ... not exactly.  I'll grant that these results are pretty cool, but they don't really require any major shift in our understanding of the origin of humanity.  So I created a helpful graphic to help me explain why.

First of all, what is this big discovery?  New human fossils were found at a Moroccan fossil site called Jebel Irhoud.  There have been numerous fossils discovered here before, with at least five different individuals discovered by this research team.  The fossils were dated by a method called thermoluminescence to 315,000 years before present.  The fossils also are a little different from modern humans, with a bit heavier brow and a longer, narrow brain case.

That date is pretty surprising since it's about 50% older than the previously "oldest" known Homo sapiens fossils.  It's also nearly twice as old as the date listed on the sign at the Smithsonian for the model of the Irhoud 1 skull (shown above).  Does that mean we need to toss out our anthropology books and start over?  Not really.

Some have suggested that these fossils were not expected to be found in Morocco, but we can't realistically be that sure about the African fossil record.  Most of the continent is unexplored, and if anyone was certain prior to this that Homo sapiens originated in east Africa or southern Africa, they shouldn't have been.  Even if the African fossil record really was well-explored, I'm still not convinced we could be that certain about precisely which part of the continent humans supposedly originated.

From a creationist perspective, these fossils are interesting but not all that different from what we've already known as human.  Young-age creationists recognize as human fossil forms that are much more different from modern humans than these Jebel Irhoud fossils.  The characteristics of these fossils help us to see how modern Homo sapiens could be connected to some of the different forms of humans that we find in the fossil record (like Neandertals).

How should creationists interpret the date?  Well, we can say for sure that this isn't the earliest "human" but only the "earliest" Homo sapiens.  Fossils already accepted as human by creationists are considerably "older" than these fossils.  Plus, there's a huge amount of uncertainty for creationists when re-interpreting a combination of thermoluminescent dating, molecular clock inferences, and other forms of fossil dating.  I'm not really qualified to comment on thermoluminescent dating, but I know when inferences are built on inferences which are built on other inferences.  That's a time to be reasonably skeptical.

So, they're great fossils.  They fill in a nice part of our understanding of human origins, whether you accept human evolution or not.  The original papers are published in Nature, but apparently you can read them online for free if you click through from their news article.

If you enjoyed this article, please consider a donation to Core Academy of Science.  We're currently raising money to help renovate our new building, and this week (June 7-10, 2017), we trying to reach a matching gift of $700.  To find out how you can support our work, visit coresci.org/building.