August 29, 2016
I found this little guy hanging on the wall outside my office the other day, and he obliged me with one photo (but then got skittish and ran away).  This is Plestiodon fasciatus,  the five-lined skink, which is extremely common in the eastern U.S.  We have several that live on our porch.  I see them at least once a week. 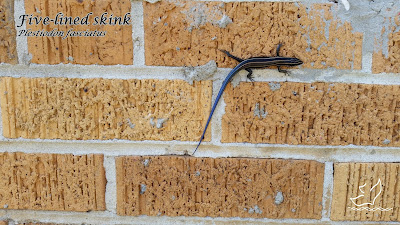 My lizard friend reminded me of a fantastic study I heard about years ago at an Evolution conference.  The paper was published by Watson et al. in Zoology in 2012.

The basic question is, Why do lizards have blue tails?  One reason animals develop strange colors is for mating.  Another possibility is that they might give  the animal some kind of protection.  The protection idea is especially interesting, since these lizards can blow their tails when attacked.  It's called autotomy, and the tail wiggles around after it detaches.  This wiggly tail presumably gives predators a decoy to distract them while the tail-less lizard gets away.  But why would a tail be blue?

After 48 hours, they inspected their models to see what happened.  Bird attacks would register as claw marks left in the clay.  They found that regardless of the model, the average number of bird attacks was the same, which means that the blue color didn't make the lizard more likely to be attacked by a bird.  There was a significant difference in where the birds attacked, though.  Blue heads had significantly more bird attacks than bodies, and blue tails also had significantly more attacks than bodies.

So it seems like the blue color of the tail attracts bird predators that would already attack anyway.  They see the blue color and go for that instead of the lizard's body.  Since lizards can survive an attack on their tails but not on their bodies, having a blue tail is a great way to avoid death by bird predators.