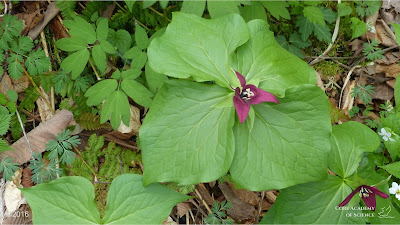 I'm wrapping up my research week today with a short post on research projects ongoing at Core Academy.

First up, our trillium project.  Three years ago, when Roger Sanders and I launched Core Academy, we spent a lot of time exploring the woods in the southern Appalachians, and one day in May, we stumbled across a funny-looking trillium flower: It was all petals.  I was mildly intrigued by this, and I had not heard of such things before.  After reading up on the subject, it turns out that trilliums have lots of weird growth forms known, but none of them have been carefully characterized with modern technology.  In other words, we don't know exactly what causes trilliums to have weird flower forms.  The next year, we went back to check on it again, and we found it growing in the very same spot.  At that point, we recruited a student intern to work on the project (or she recruited us - it's kind of hard to tell sometimes), and she's been going at it full steam since then.  We tried cloning the plants last year (unsuccessfully), and this year we're going for DNA sequencing.  This year's fourth annual survey of the growth site revealed something even more interesting: there are other weird growth forms in the same location, including that four-leafed trillium in the picture above.

Why is any of this interesting?  The southern Appalachians are the most diverse location on the planet for trillium species (and lots of other species too).  Why do we have so many different forms of trillium here?  Do these weird growth forms have anything to do with the difference between a large-flowered trillium and a nodding trillium?  That's what we want to find out.

I'm also working on a big mammal baraminology project.  You might recall that baraminology has to do with identifying "created kinds."  The statistical methods I use have been criticized by some for a variety of reasons.  Back in 2009, I tried to do a study to see if there was some consistency to the results of these studies, but my analysis was inconclusive.  There was definitely a bias in favor of baraminology, but it was not significant.  Since then I did a much larger survey but I didn't do the full baraminology analysis, so once again, I don't think those results were entirely decisive either.  Over the next year, I hope to finish a huge survey of mammal created kinds that I hope will help me settle this question: Is baraminology finding anything real or is it just a bunch of statistical mumbo jumbo.

Roger Sanders is busy doing a similar project with flowering plants.  Roger's an expert in flowering plant systematics, and I'm really excited to see how his project turns out.

In addition to these main projects, we're also collaborating and contributing to other projects.  Roger is working with Steve Austin on coal and floating forest research.  Joe Francis and I are throwing around some ideas on human disease, and just this morning, I was plotting a fossil project with Paul Garner.

All of that is great stuff, but the best thing is coming on Monday.