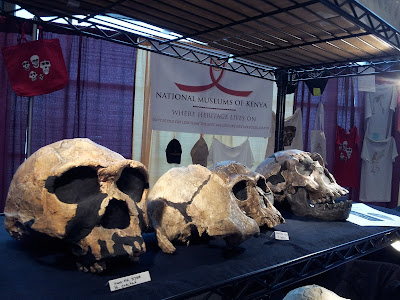 What a day!  This was my first day at an anthropology conference, and I spent the entire morning in a session called "Hybridization in human evolution: What can other organisms tell us?"  The emphasis was definitely on other organisms.  I heard the Grants talking about the finches, which was quite similar to the talk I heard them give back in Ottawa at Evolution 2012.  Deja vu all over again.

Beyond that, it was incredibly refreshing to hear the talks in this symposium.  Hybridization has been a passing interest of mine for a long time (thanks to Frank Marsh), and long ago, I came to the conclusion that hybridization was not remotely rare (like I had been taught) and that the biological species concept didn't really explain what we were seeing in the real world of hybridizing species.  Sure enough, Rebecca Ackermann of the University of Cape Town said that the Biological Species Concept is basically dead.  That was in the first talk of the day.  In the second, Mike Arnold of the University of Georgia said that introgressive hybridization is the rule in eukaryotes, plants and animals.

Now that might not mean much to you, but it means a lot to me.  The biological species concept was an explicitly evolutionary idea, that species would be distinguished by their inability to breed with each other.  In other words, as a new species evolves, it becomes unable to cross with members of other species.  The mule (horse x donkey) and liger (lion x tiger) were thought of as exceptions that proved the rule.

Now I say that biological species concept is evolutionary, and it was, but predecessors of the BSC were not.  The idea of reproductive faithfulness characterizing species goes back to the beginning of modern science, and the sterility of the mule was thought to prove that God did not approve of hybrids messing up His species.

Now we know that isn't the case.  Species hybrids are very, very often fertile and able to produce their own offspring, and creationists have largely come to terms with species coming from other species.  So it's great to hear that scientists who study hybridization are beginning to recognize that the simple idea of reproductive isolation isn't quite cutting it any more.

This is especially relevant in light of the afternoon session that I attended, where I heard talk after talk discussing the intricacies of human hybridization.  I learned that there is a dearth of Denisovan and Neandertal alleles around the FOXP2 gene.  FOXP2 is associated with speech in modern humans, so that was interesting.  There were several talks on Neandertal immunity genes and methods for detecting traces of "adaptive introgression," the situation where a Neandertal or Denisovan gene becomes selected for when expressed in a modern human genome.