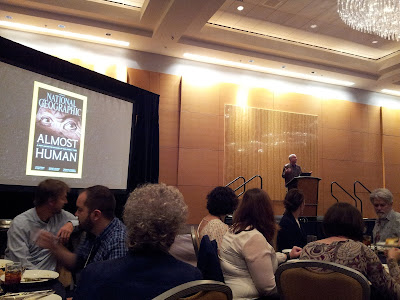 Saturday was Homo naledi day.  I began my day with the symposium on Homo naledi, with thirteen talks mostly by the research associates.  They went over just about every aspect of naledi you can imagine.  A few highlights:


For lunch, I attended the banquet with Berger giving his special presentation.  Apparently, there were twice as many people as there were last year at their banquet.  Big surprise, eh?  Berger seemed just as generous and open as he appears on TV.  He immediately acknowledged the hard work of the 150 researchers who have worked on sediba and naledi.  "This is not the Lee Berger Show."

His presentation was basically a quick review of his entire career, beginning with his long excavation work in the 1990s at a site called Gladysvale.  He described his discovery of Google Earth and how he used it to find his house (like we all do).  Then he described using it to find known fossil sites, which helped him learn how to recognize hominin fossil sites from satellite images.  He used that knowledge to locate 600 potential new sites.  Malapa, where sediba was found, was just 50 m from the road he used to drive to get to Gladysvale.  That led him to conclude that we should be looking for new hominins in "the places we know best" because those are the ones that are most likely to have fossils.

That plan paid off with naledi.  After the late night discovery, he called his program officer at National Geographic at 2 in the morning.  The next day he put up the ad on Facebook to recruit excavators, and three weeks later they started excavating.  The speed is just staggering.  Berger called the decision to live-stream the excavation "controversial," but I didn't hear any objections from the audience.  I suspect the controversy is exaggerated by the press and one Berkeley paleontologist.

The big lesson of the day: Never stop exploring.  Berger then announced that the sediba fossils would be released to Morphosource and that they're working on a composite skeleton model of naledi that they also plan to release to Morphosource.  Soon you'll be able to print your own copy of an entire naledi skeleton!  (Yes, I'm giddy at the thought.)  No one could get him to even give a hint about the date of naledi ("No one's asked me this much about dating since I was 19!"), but he did spill a few beans about the next big thing.  If I understood correctly, he said that the next fossil announcement that isn't Malapa or Rising Star is coming probably during the last quarter of 2016.  "They're good!" was all he would say about these new fossils.  I can't wait.