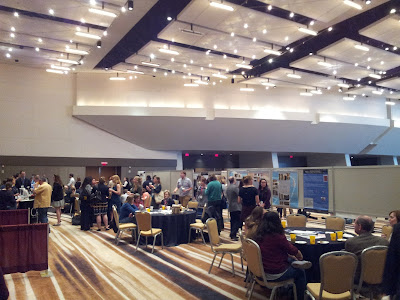 This was my first day of hardcore physical anthropology... sort of.  I actually started the day in a toolmaking symposium watching videos of monkeys cracking nuts with rocks.  Lots of videos of monkeys with rocks.  It was actually kind of cute.  There was this one young monkey who wasn't very good at it, but he kept wacking away.  Never did get the nut open.  Aw....  Check it out:


I also learned that 92% of gorilla nests have fresh fecal matter in them.  Maybe they keep it handy in case they need to fling it at somebody?  That was in a talk by Crickette Sanz.  I understand she was interested in that little factlet because gorilla nests are places where new plants grow, and she's interest in the extended synthesis, which is all about how organisms modify their own niches and thereby alter their own selection and evolution.  I just kept thinking, "Gorillas sleep in their own poop!"  That's pretty heavy for 8:45 am.  She also gave a really interesting update on her research on termite fishing in chimps, complete with video (video was definitely the order of the day).

I heard many talks today on morphology modeling and scanning and other things I'm not entirely fluent in.  Being a genomics/molecular kind of guy, I knew this conference was going to be out of my element, but some of these talks were a real stretch.  That didn't prevent me from learning a lot of cool things.

Linda Smith from Indiana University gave a fascinating talk on her research about hands and language acquisition.  She had video too, where she attached a head camera to toddlers.  So you can see the world from their perspective, which is about as crazy as you would expect.  What was so fascinating was the things they looked at.  As they get older they spend more and more time looking at their own hands.  Then she found that handling objects is correlated with naming.  So if you show a baby an item and say its name, the kid's not likely to remember.  But if you let the kid hold the item and then say its name, the kid's more likely to remember.  As I watched the video I started thinking about what it would be like to discover your own hands at that age, and realize, "Hey, those meaty things with the fingers that I keep seeing, they're attached to me, and they're my hands and I can pick stuff up and do things with them!"  No wonder they look at their hands more as they get older.  I thought it was fascinating.

Another talk I really enjoyed was by Dietrich Stout from Emory (right around the corner).  He's interested in how the brain makes it possible for us to make stone tools.  He was looking at a part of the brain called the right Inferior Frontal Gyrus (rIFG - see what I mean about being out of my league?), and he found that characteristics of the rIFG (measured by fractional anisotropy - I didn't write down what that was exactly) correlated with a person's skill in toolmaking, before and after learning.  But the rIFG didn't correlate with learning, so evidently people who were better at toolmaking before training were still better at it after training.  Training and practice improved everyone's skill but I understood that training didn't improve their skill relative to everyone else in the group.  The best toolmakers were still the best before and after the training.  So I thought I must have a terrible rIFG anisotropy, because I've got no hand-eye coordination to speak of, no matter how much I practice things.  Just ask my high school gym teacher!  Wait, on second thought, don't do that.  That's embarrassing.

In the afternoon I went to the session on paleoanthropology methods, which was more scanning and graphs and principle component analysis and very little digging up fossils.  Not that there's anything wrong with that.

I thought Rachael Bible's niche modeling of Neandertals was really interesting, and Bernard Wood's "Rumsfeldian" approach was spot on.  "We must work with the data we have, not the data we wish we had."

For me the real eye-opener of the afternoon was Ashley Kruger's scanning of the Rising Star Cave where Homo naledi was found.  And by "scanning the cave" I mean the whole thing.  It actually looks a lot different from the schematic diagram that's been published everywhere.  I'd been wondering what the cave was really like.  Now if there was just an Oculus walkthrough for us middle-aged, overweight professors who couldn't dream of squeezing down the "chute," that'd be awesome!