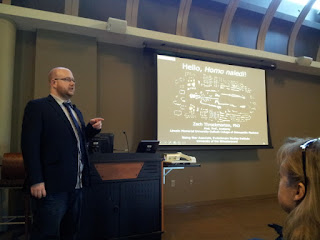 On Saturday, November 21, I had the privilege of hearing Zach Throckmorton of Lincoln Memorial University speak on Homo naledi at the Gray Fossil Site just outside of Johnson City, TN.  Dr. Throckmorton is an expert on feet, and he was part of the research team that studied the fossils of Homo naledi after they were excavated from the Rising Star Cave.  My regular readers know how excited I've been about the discovery of H. naledi in the Rising Star Cave in South Africa, and so it was an easy decision to go hear Dr. Throckmorton at one of Tennessee's most intriguing fossil museums (seriously, you should check it out).

His talk was a pretty straightforward recounting of the discovery and description of the Rising Star fossils.  If you've been following the news at all, then you probably know all the details, so I won't recount them here.  He confirmed that the shoulder, arm, and hands all appear to be adapted to tree-climbing, and he indicated that the foot was extremely human-like.  According to his story, he got a little nervous when he first saw the photos of H. naledi's foot, because he thought it was modern human (then he looked at the rest of the pictures and knew that it was not modern human).  He also emphasized that the bones were free from disease and disorder.  Not even a cavity.  Other than some mild arthritis, these creatures lived a pretty healthy life.

I was quite struck by his candid discussion of the burial of these creatures.  He was careful to note that they preferred the burial hypothesis because they could not find another credible explanation for why the bones would be in that remote chamber.  At the same time, he admitted that these hominins not only buried their dead but also must have used fire to get that far into the cave.  There is no direct evidence of fire use, but how else could they see to get the bodies into that chamber?  He noted that even in modern caves where we know that people have used fire, ash and accidental scorch marks are generally absent.

What will the future bring?  Dating and DNA of course.  Dr. Throckmorton was not optimistic about the DNA, though, but it's worth a try.  He alluded to the "controversy" consisting of some rather nasty accusations that have been stoked by the press, but he remained enthusiastic that they were doing paleoanthropology "right."  I couldn't agree more.  My favorite slide from his talk: 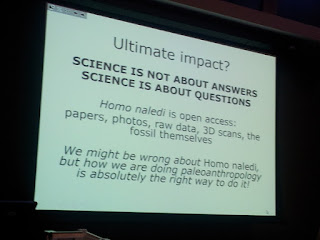 Those of you still wondering what I think will have to keep wondering for a few more months.  There is still a lot of work to do, and I'm still not inclined to spill the beans too soon.  I did want to mention that Joel Duff's blog "Naturalis Historia" has a little score card of Homo naledi opinions from ICR, CMI, and AIG if you're interested in such things.

That's all for now.  Dr. Throckmorton's talk was very interesting (I learned a lot about anatomy too), and I'm grateful to the Gray Fossil Site for hosting him.