Can we love one another? 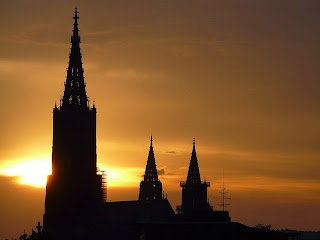 Darrel Falk returns this week with a discussion of Paul's first letter to the Corinthians, and it's a very interesting read.  It's hard to argue with Paul, but I'm really curious about Darrel's application.  It sounds good, but since I almost never see it in practice, I'm wondering if he's on the right track.  I would love to hear your ideas.  You can email me at toddcharleswood at gmail dot com, or just pop over to the Core Academy Facebook page and leave a message there.  Thanks to Darrel for continuing the conversation.

Todd expresses my own thinking wonderfully well, when he writes:


It's easy to deal with problems by pretending the issue doesn't matter, but if it really didn't matter, then why is it a problem? Our postmodern society just wants us to deny that there's any truth content in religion at all. Supposedly, any religion is just as good as another, and whatever works for you is fine. I don't believe that either. That's a broad path that leads to destruction. There's truth at stake in my conversation with Darrel, and it's important truth. Our difficult disagreements should not be brushed under the rug. They deserve respect.

So we each think that when it comes to the age of the earth and the mechanism by which God created the variety of life forms, that the other has bought into something completely untrue. We also believe that the position we hold is extremely well-founded and that the alternative take on truth is a mistake with dire long-term consequences. So what are we to do? What are Christians, in general, to do when they disagree about issues of great importance? How do we approach our understanding of truth when we think the other has it gravely wrong?

Paul’s discourse on love in I Corinthians 13 is one of the best known chapters in all of Scripture. In fact it is so well known, that its profundity can easily become lost in a blur of familiarity. The chapter is about love of course; we all know that. However, at a deeper level, it is about truth and the appropriate posture for Christians to take when they are quite certain they know it. Paul tells us that no matter how certain we are that we’re right, indeed no matter how right we are, our knowledge is worthless unless it is bathed in humility—child-like humility.

When Paul wrote the content of this thirteenth chapter, he did not place a chapter-break to separate it from that which had just been written. Paul had just introduced the concept of the parallel between how the parts of the human body function as an integrated whole and how the church is designed to function as a unit as well. He points out a wonderful biological fact: there is no dissension among the organs and tissues of a properly functioning human body because each part is functioning on behalf of the others. So it is with the body of Christ, Paul tells us. There must be a certain posture towards what we think is truth—even when we’re quite certain about it—if the church is going to function as an integrated whole speaking into the world as a whole. If the Body is not functioning as God intends, it will be a lame caricature instead of that which brings Christ’s love and beautifully functioning presence into a world highly devoid of functionality and love.

There is such a thing as truth. Paul begins this letter to the church at Corinth emphasizing that. But in the overall scheme of things, Paul tells us that when we expound on truth we are like little children just learning to talk. Our view of reality is blurred; it is as if we are looking into a distorted mirror, he tells us. This doesn’t mean we aren’t to speak of truth. In Acts 17, he tells the men of Athens that accessibility to the wisdom they are seeking is all around them if they would only reach out and grab for its source. Paul’s first eight chapters of Romans may well be the most profound discourse on truth ever written. Still having come so close to it that he could reach out and feel its very texture, he reminds us that if the Body is going to successfully bring God’s love into a deeply hurting world, humility—even when we’re sure we’re right—trumps everything. We are, after all, just little children barely learning to speak about reality. As the thirteenth chapter ends, it becomes clear that even Paul, divinely inspired scribe that he is, considers himself to be one of those little children too.

As Todd has said so well, this does not mean that seeking after truth doesn’t matter. There is nothing more important in life than the belief that truth exists and that we can and must seek after it. However, as Paul has said, when we expound with confidence that we know the truth and do so without love, we’re like a clanging cymbal, a noisy gong. The truth content of our words is empty unless the words are bathed in love for those who don’t see it our way. Even if we were so smart that we understood all the mysteries of the universe, we would be nothing without love. In other words unless the posture with which we hold our ‘knowledge’ is one of bended knees, open heart, and arms which reach out to others who think differently, we will have missed the most fundamental tenet upon which all reality is based. God, above all, is love and our calling is to live in his image.

So Todd and I have very different views of what the early chapters of Genesis are telling us about creation and the extent to which we can trust the findings of science to tell us about the material basis of reality. I have much more trust in the power of our God-given minds to successfully use science as a tool to arrive at something that approaches truth than I think Todd does. The evidence for God having created all of life through the evolutionary process is overwhelming as I see it. Furthermore, I think it is completely consistent with orthodox Christian theology, including a historical Adam and Eve, albeit not as the sole biological progenitors of the human race. I also think it enriches the Christian faith. Todd, on the other hand, places much more emphasis on our child-like understanding when it comes to interpreting the findings of science and reading the words of Scripture than I do. He, along with others, is working to develop an alternate way of thinking about material origins—one that he thinks will eventually be well-grounded in the scientific process. I respect that and I respect him.

If my words or even my thinking ever manifests itself as a self-gratifying pride in how I’m right and those like Todd are wrong, then I will be the one who is even more wrong than they. In that case, my words will have become a clanging cymbal, a noisy gong—air molecules vibrating for a bit before vanishing into a meaningless vacuum.

Our purpose in talking is to lay out the basis of our thinking as clearly as we can. We’re not trying to convince each other, but we think we have a responsibility to clearly expound on the foundations upon which our thinking is grounded. Peeling back the various layers of why each of us think as we do is hard work and requires much time. However, because we each value pursuing God’s truth so highly, we respond to what we think is a calling to lay out all aspects of our thinking, and to do so in love.