March 02, 2015
The front cover of the March National Geographic was a bit of an eye-opener. In case your subscription hasn't arrived yet, here it is: 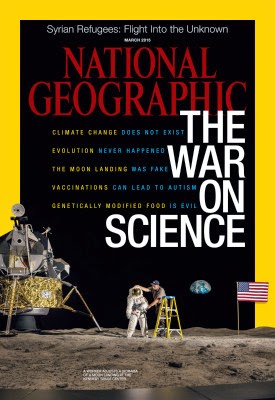 Honestly, the cover article, "The Age of Disbelief" by Washington Post writer Joel Achenbach, isn't that bad.  The article's mostly about climate change, and it hardly mentions creationism.  Achenbach describes some really interesting studies, including one by Dan Kahan at Yale University that showed that basic scientific literacy did not correlate with acceptance of human-caused climate change.  Instead, scientific literacy correlated with an increasing polarization of opinion about climate change.  Knowledge of science is used to reinforce preconceived worldviews, which I'm not the least surprised by.  Frankly, that sounds remarkably similar to claims made by many creationists for many years:  We all have the same facts and the same reasoning abilities, but when you add to those the assumptions which are necessary to make conclusions from facts, we can end up in really different places.  There you have it, folks, right in the pages of National Geographic.

Achenbach describes Kahan's work in terms of tribalism.  As Achenbach describes it, Kahan's work revealed two basic tribes (there would be many local varieties of course, but two overarching themes).  First is the egalitarian, communitarian tribe that is skeptical of big business and are much more likely to accept government regulation.  The second tribe is more individualistic and hierarchical and wants government to butt out and are more apt to trust others (like big business) to behave responsibly.  How you reason and how you interpret data are basically determined by the tribe you belong to, not by some objective standard of truth.

What made the article most fascinating, though, is the way it dances back and forth between commenting on tribalism in a sort of meta-tribalistic fashion and being overtly tribalistic.  On the one hand, Achenbach quotes Science editor Marcia McNutt very favorably: "Science is not a body of facts ... Science is a method for deciding whether what we choose to believe has a basis in the laws of nature or not."  OK, that goes a little weird at the end, but I'm 100% in favor of science as a method not a body of truth.  Achenbach also emphasizes the fallibility and uncertainty of science.  Because science is a method conducted by fallible and limited humans (my words), science is always susceptible to changing and revision and updating.  Nothing is ever final in science.

On the other hand, Achenbach is clearly a member of a tribe and has no reservations about showing his true colors.  He writes, "... evolution actually happened.  Biology is incomprehensible without it."  That's nonsense, of course.  There are huge swaths of biology that can be understood without knowing about evolution.  Historically, it's even more absurd.  Evidently, no one knew a thing about biology until Darwin's Origin of Species.  How could Darwin even make an argument for evolution from biological data and have other people understand and accept it based on their own understanding of biology?  No one could understand biology without evolution?  It's just absurd, but there are enough tribalistic voices saying that very thing in modern science as they battle against the "threat" of creationism.  "To reject evolution is to reject science," so we're told, even though by this very article's standard, that's probably not true.  Rejecting evolution is only at best rejecting a particular tribe's take on science.

Beyond the evolution question, Achenbach shows his cards again and again.  Science is not just a method.  Science is knowledge.  He opens the article with an anecdote on fluoridation and transitions to the article's theme by writing, "We live in an age when all manner of scientific knowledge ... faces organized and often furious opposition."  Even while admitting that science is a method that can only ever offer provisional interpretations of data, he quotes NIH director Francis Collins, "Science will find the truth ... It may get it wrong the first time and maybe the second time, but ultimately it will find the truth."  And after his evolution comment, he comments, "Being right does matter - and the science tribe has a long track record of getting things right."

Understanding human tribalism and especially how different tribes interpret evidence and use the method of science ought to give us all pause.  That's the crucial message I take from this article.  There is no tribe that is impervious to demands of their tribe, and that goes just as much for science as any other tribe.  When there's a tribal conflict, we ought to be just as critical of ourselves as we are of the other tribe, but usually we just trot out our own "experts" to quote data and arguments that reinforce our tribe's beliefs.  But if our own tribe's beliefs are pre-determined and somewhat impervious to data and logic, shouldn't we be more careful about our own beliefs before we go attacking the other tribe, regardless of what tribe we're from?  How can we choose which tribe is right?  (Remember I'm not a post-modern. I do believe in truth.  I just don't believe that science has a monopoly on accessing truth.)

The irony here is that Achenbach assumes that his tribe is the right one.  After all, they have a great track record, right?  But that's the very essence of tribalism!  My tribe is right, and your tribe is wrong.  It doesn't get us anywhere.

Maybe what we need for tribal squabbles are people who actually go between the tribes?  We need good listeners, people not to find fault or to preach the message of their own tribe.  We need people who genuinely want to understand where the other tribe is coming from.  Basically, we need to remember to love our enemies and pray for those who spitefully use us.  Somehow in all these debates over vaccines and climate and evolution, that great command has gotten lost.

Having read this far, I'm sure the science tribe is sputtering in frustration, "But we do have a better track record!"  Is it plausible that evolution is just a problem of bias?  Is it realistic that the consensus of climate researchers is mistaken?  Isn't that ludicrous?  How could so many scientists be so wrong?  Let's talk more about that in my next post.