Post-Seculars and the war between science and faith

February 09, 2015
As you probably know, it's kind of cliche by now that science and faith are at war.  According to a couple of famous (and notoriously biased) books published in the last three decades of the nineteenth century, science and religion (especially Christianity) have always been fighting for supremacy.  Supposedly, faith demands allegiance without any evidence or rationality, but science is always questioning and moving forward.  Obviously, faith supposedly holds us back in ignorance and fear, while heroic science moves us forward to the light of truth and logic.

Despite recent historical studies that suggest that warfare is only one of a number of ways Christians have interacted with science over the centuries, the myth of warfare persists, due in no small part to those who perpetuate it with their own lives.  It seems like Richard Dawkins's entire body of work exemplifies this warfare perspective.  But what if warfare isn't the whole story?

Enter the work of O'Brien and Noy, published in the most recent American Sociological Review (I found a full-text PDF here).  They examined the results of the General Social Survey, which has been conducted by the National Opinion Research Center since 1972.  In addition to questions on many other topics, the survey contains questions on science literacy and on opinions about the Bible and religion.  O'Brien and Noy examined the science and religion questions in order to see what groups can be recognized in the responses. 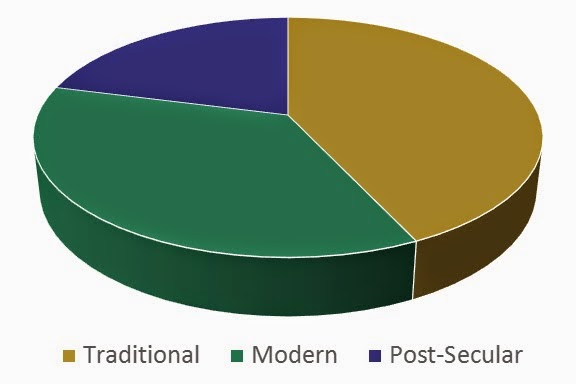 Politically, Post-Seculars seem to be an interesting contrast.  They are the most likely group to oppose legal abortion "for any reason" and to oppose government-funded embryonic stem cell research.  But they are significantly more likely than Traditionals to favor legally requiring the manufacture of more fuel efficient cars and trucks, which isn't something I would normally associate with political conservatives.

In the area of science knowledge, here is a sample of the questions asked and the frequency of correct answers from each group.  Notice that the Post-Seculars are significantly better than the Traditionals.  This is typical of all the science questions. 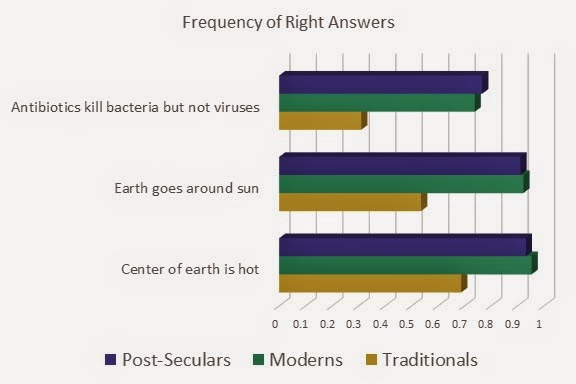 On issues of origins, the differences are far more stark.  Post-Seculars are the least accepting of human evolution or the Big Bang, and they are significantly less likely than Moderns to accept "millions of years" of plate tectonics.  Now look carefully at the frequency of agreement with "millions of years."  The Traditionals were the most likely to reject that, but a third of Traditionals accepted human evolution from animals.  Traditionals must be a strange mix of folks or just really confused about science.  Since 80% of Post-Seculars accepted "millions of years," young-age creationists must be infrequent in that group. 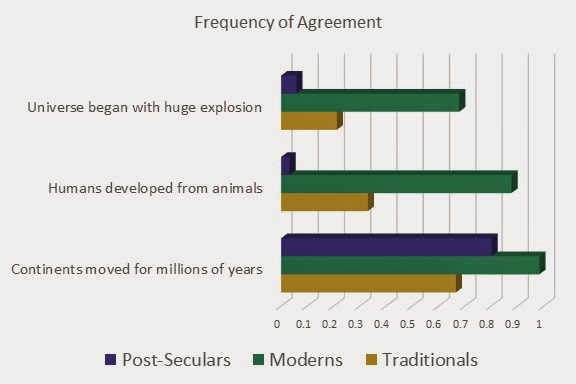 What conclusions might we draw from this study?  Well, it's a limited sample of questions, and that makes me wary about getting too excited.  Still, it definitely fits with my own experience.  Notice from the answers to the origins questions that our traditional categories of young-age creationist, old-age creationist, theistic evolutionist, and atheistic evolutionist does not conveniently fall out of this.  Instead, it seems that some young-age creationists (my favorite group, for obvious reasons) are Traditionals and some are Post-Seculars.  I find that very familiar.  I run into Traditionals all the time.  These are the folks who rant about "speculation" and ask me things like, "If we evolved from monkeys, how come there are still monkeys?"  This is sort of the stereotypical creationist, the kind that anti-creationist websites and books are made to counteract.

Here's my concern, and this is a concern that animates much of what Core Academy does:  It seems to me that children of Traditionals are vulnerable.  They can stay Traditional, which is possible if they never really get exposed to or interested in good science, but what happens when they take a college biology course and learn about evolution or climate change or some other "controversial" topic?  At those formative moments, the light goes on, and the kid has a choice: (1) create a new way of understanding science while keeping your religious upbringing or (2) abandon religion altogether and go with purely secular science.  These options are extremes, of course, and it's quite possible that someone might think they're making room for science and religion when in fact they're moving towards abandoning religion altogether.  Abandoning the faith doesn't always work either, because the Holy Spirit doesn't always go quietly.  When it comes down to it, though, this is the basic crisis of faith caused by science.  We read and hear about it all the time, but calling it "Traditional" and "Post-Secular" gives it a nice academic flavor.

So what do we do?  I think we need to work very hard to move people from the Traditional to the Post-Secular camp.  We must help people to understand and appreciate science without losing their faith.  To do this, we need to speak the language of faith.  Traditionals will not respond to a "hard sell" from Moderns who they suspect are trying to de-convert them to agnosticism or atheism (which many Moderns want to do).  We need more Post-Seculars to stand up and speak out and help guide their fellow Christians through our modern scientific world.  It doesn't always work, but it can work, especially on the children of Traditionals.

It's worth a try, and as I said, that's what Core Academy is all about.


O'Brien and Noy.  2015.  Traditional, Modern, and Post-Secular Perspectives on Science and Religion in the United States.  American Sociological Review 80(1):92-115.