November 14, 2013
For those who care, filmmaker Darren Aronofsky, known for The Black Swan, The Wrestler, and Requiem for a Dream, is making a film about Noah and the Flood.  Today, we get a glimpse of the poster and the first two trailers. 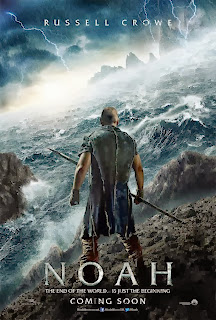 For myself, I am wary.  I've already read two different takes on an early script draft (Brian Godawa's and Peter Chattaway's).  Admittedly, they both reviewed early drafts of the script, so the final version is likely to be different, but I am concerned about turning the Noah story into a modern environmentalist fable.  The Flood story is pretty grim to begin with (all of humanity wiped out in a single, global catastrophe?), but the notion that humanity must be destroyed because we're bad for the planet?  That sounds like the stereotypically worst attitudes that the environmentalist movement has to offer.

An article about a month ago in The Hollywood Reporter claimed that preview screenings "generated troubling reactions," whatever that means.  Aronofsky and Paramount apparently disagree about how to fix the final film.  This happened to plenty of other movies, but it does make me nervous.

Will this be another masterpiece in the tradition of Passion of the Christ, bringing out the faithful in record numbers, or will this be another flop made by a studio and director who just don't understand the religious audience?