July 28, 2011
I went on my first geology field trip today, which was fascinating. Perhaps more culturally fascinating to me than scientifically fascinating, but I still enjoyed myself. (I admit that a lot of the geological detail was over my head.) Here we are at an outcropping of the "Great Unconformity:" 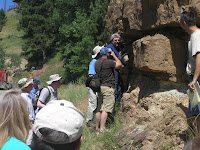 Speaking as a biologist, I thought the Unconformity was pretty good. I don't know about "great," but that's probably because I haven't seen it across most of the continental United States, which I guess would make it pretty great. Steve Austin interpreted the Great Unconformity in the Grand Canyon as the onset of the Flood, where the initial Flood waters eroded off the existing rocks from the pre-Flood world.

Meanwhile, the conference abstracts are available at the JCTS website, along with a short editorial from Tim Clarey on the launch of JCTS Series C: Earth Science.