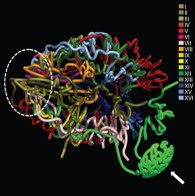 Wow! Duan et al. report a 3D structure of the yeast genome in this week's Nature advanced online. It reminds me of how much more there is to biology than just DNA sequence. (I especially object to the naive characterization of genomes as the "code of life" or "book of life" or "secret of life" or whatever.) Systems biology is just beginning to plumb the depth of the astonishing complexity of genomes, proteomes, cells, and organisms. A genome sequence is just the beginning, just scratching the surface. Duan et al. give us a first glimpse of the spatial organization of Saccharomyces cerevisiae chromosomes in the yeast nucleus, and the results are fascinating.

Here we developed a method to globally capture intra- and inter-chromosomal interactions, and applied it to generate a map at kilobase resolution of the haploid genome of Saccharomyces cerevisiae. The map recapitulates known features of genome organization, thereby validating the method, and identifies new features. Extensive regional and higher order folding of individual chromosomes is observed. Chromosome XII exhibits a striking conformation that implicates the nucleolus as a formidable barrier to interaction between DNA sequences at either end. Inter-chromosomal contacts are anchored by centromeres and include interactions among transfer RNA genes, among origins of early DNA replication and among sites where chromosomal breakpoints occur. Finally, we constructed a three-dimensional model of the yeast genome. Our findings provide a glimpse of the interface between the form and function of a eukaryotic genome.

Definitely check this one out.