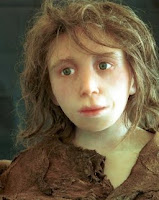 When the Neandertal genome was published with its impressive evidence of interbreeding with modern Homo sapiens, I wrote,

I do think these results bode poorly for Reasons to Believe, but I'm sure they'll come up with some kind of spin to explain why these results do not support their idea of Neandertals as non-human animals. That should be entertaining.

To satisfy my curiosity, I checked out their website last week and found lots of anti-Neandertal articles. Their big statement came in an hour-long podcast, which you'll find on their podcast page. It turns out I was wrong. Their response was not entertaining. It was mindboggling and in places irritating. First let's review the RTB position, then I'll dissect a few claims from their podcast. There are so many bizarro claims in this podcast, I'll have to deal with them over a series of posts.

Reasons to Believe is an old-earth creationist ministry (a "think tank" as they describe themselves). According to RTB, Neandertals are not human. They are animals. The only humans are Homo sapiens, and apparently not all Homo sapiens, since they place Adam and Eve at 50,000-70,000 years ago, according to the book Who is Adam? by Rana and Ross (p. 248). Apparently Homo sapiens from before that date weren't really human. Normally, I'd prefer to attribute these opinions to Rana and Ross, but they consistently refer to their position as "the RTB model," so I'll follow suit, but we all know that "the RTB model" is the brainchild of Hugh Ross and Fuz Rana.

If Neandertals are not human according to RTB, then what do we do with the evidence of not just interbreeding with modern humans but also this introgression of Neandertal genes into the genomes of modern Europeans and Asians? If the RTB model is correct and the evidence of interbreeding is also correct, then we are left with the uncomfortable conclusion that early humans committed bestiality, had half human, half animal offspring, and that offspring mated with other humans to such an extent that modern European and Asians carry around perhaps as much as 4% animal genes. Given the unpleasant and awkward implications of such a position, I expected RTB to deny the evidence. After all, in a 2004 article denying indirect evidence of human/Neandertal interbreeding, Fuz Rana wrote, "If Neanderthals interbred with modern humans, then by definition, they must be human." I expected a long explanation of why ancient DNA results are error-prone and not reliable or maybe how the unfinished draft nature of the genome is too incomplete to make firm conclusions. Once again, I was wrong. They went with bestiality.

Yes, you read that right. They elected to accept the notion of human/animal hybrids that left Asians and Europeans with animal genes. They emphasized that this was "low level" interbreeding that did not require intervention by God to put a stop to it. They suggested it might have been strong Neandertal males "raping" human women. They made no mention of Rana's earlier claim from 2004. I guess I have to give them credit for not playing the denial card, but still... Animal/human hybrids? Seriously?

I mentioned that parts of their position were mindboggling and irritating. The first part was their arrogant and casual dismissal of young-age creationism. According to the podcast,

Rana: One of the things they noticed immediately again is that Neanderthals again are distinct species from humans, that they did not directly evolve into humans.
...
Ross: The young earth creationist claim that Neanderthals and humans are all part of the same species, all descended from Adam and Eve is falsified in the sense that this study shows that the genetic makeup of humans is too different from that of Neanderthals for them to be one and the same species by a wide margin. And also they point out that there are morphological distinctives that remain. Neanderthals have a huge nasal capacity. They got a different shape of the hole that allows the spinal cord to go up into the brain. And as Fuz points out, they got the barrel-shaped body and the short limbs. And their brain structure is different. So all that points to the fact that they really are distinct species. They're not human. So by two lines of argument, the young-earth model has been falsified by this study.

First of all, there was absolutely, positively no discussion of species status in the Neandertal genome paper. None. Now look again at what Rana and Ross said. Rana said, "one of the things they [the Neandertal genome researchers] noticed ... is that Neanderthals are distinct species from humans." False. "They" did not say anything about that. Ross said, "this study shows that the genetic makeup of humans is too different from that of Neanderthals for them to be one and the same species by a wide margin." False again. That was not part of the paper. Don't believe me? Check out the original Neandertal genome paper yourself. It's free. Search for the terms "species" and "subspecies." You will not find any passage related to Ross's and Rana's claims. I could understand if they said something like "the data in this study support our claim that Neandertals are a separate species from humans," but they didn't. Ross and Rana both claim that the researchers and the study confirm that claim, and that is false.

Want to know what the Neandertal genome researchers actually think about this question? Check this article from New Scientist, where Svante Pääbo gave this ambiguous quote: "I would more see them as a form of humans that were a bit more different than people are from each other today, but not that much." He carefully avoids stating his opinion on the question of specific or subspecific status for Neandertals.

But what about the data? It's ambiguous. Yesterday, I showed a tree that emphasized the differences in mitochondrial DNA between modern humans and Neandertals. Here's a tree with a different perspective: 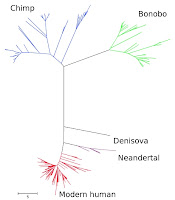 This tree was constructed from 259 different "Hypervariable Region 1" (HVR1) sequences from chimpanzees, bonobos (pygmy chimps - a separate species), modern humans, Neandertals, and the Denisova sequence. As before, this is a neighbor-joining tree where branch length is proportional to the number of nucleotide differences. What I want to illustrate here is something quite subtle. If you look at the size of the blue branch that contains the chimpanzee sequences (all from the single species Pan troglodytes), you'll see that it is about the same size as the branch containing modern humans (in red) and Neandertals (in purple). That means that HVR1 differences seen in chimps is approximately the same magnitude of variation seen between humans and Neandertals. So by analogy, if modern chimps are all one species (distinct from bonobos), then humans and Neandertals are also one species.

But those are HVR1 sequences, which are not part of the published study of the Neandertal draft genome. What does the Neandertal draft genome tell us? The paper is understandably focused on the differences between Neandertals and modern humans, but the authors do make this important comment, "A special challenge in analyzing DNA sequences from the Neandertal nuclear genome is that most DNA fragments in a Neandertal are expected to be identical to present-day humans." Furthermore, when they examined three million nucleotides that differed between humans and other primates (chimps, orangutans, and macaques), they found that the Neandertal matched the human sequence in nearly 90% of the cases. In only 78 genes did they find that the Neandertal coding sequence differed from modern humans and matched chimpanzees. That's 78 out of three million potential differences. Not very much.

I would also suggest that interbreeding with modern humans supports the subspecific status of Neandertals. I argued yesterday the opposite case, but as I said, the evidence is ambiguous. If you want to use the interbreeding to argue that they're one species, that's certainly possible. So between modern humans and Neandertals, we have ecological similarities, overwhelming morphological similarities (despite Ross's laundry list of anatomical trivia), behavioral similarities, vanishingly few genetic differences, and the ability to interbreed. That makes a reasonable case for subspecific status.

I'm going to have to continue dissecting this podcast in future posts, since this post already too long. I'll wrap it up with this observation. The status of Neandertals as a subspecies of modern humans or a separate species altogether is difficult to settle. A good case can be made for either position. That ambiguity is compatible with the young-age creation position that Neandertals are descendants of Adam and Eve. In my personal view, Neandertals are a separate species that interbred with Homo sapiens. Other creationists would argue that they were just a subspecies. Either way, young-age creationism can handle evidence of interbreeding, since both Neandertals and Homo sapiens are descendants of Adam and Eve and are made in the image of God.

In contrast, "the RTB model" persists in classifying these obvious humans as animals. In direct contradiction to Rana's previous claim to the contrary, they now say that human/Neandertal interbreeding does not falsify their model. To support their model, they make demonstrably false claims about published research and erect a straw man of the young-age creationist position. Despite all that, if you still accept their model, you accept ongoing bestiality between humans and Neandertals, resulting in animal genes present in modern Europeans and Asians.

I know which model I'm going to choose.