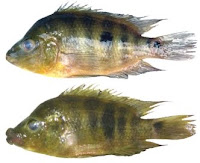 There are three interesting papers in BMC journals this week. In BMC Medical Genetics, Handel and Ramagopalan what I would consider another retread of connecting "Lamarckian evolution" to epigenetics. The idea is pretty simple. Among Lamarck's ideas is the claim that certain characteristics acquired by parents can be passed on to their offspring. This was not unique to Lamarck, and some have argued that it is unfair to equate Lamarckism with inheritance of acquired characteristics. Nevertheless, the discovery that there are mechanisms of inheritance that can modify genetic inheritance (i.e., epigenetics) has revived interest in this version of "Lamarckism." It's become kind of fashionable to discuss Lamarck in the context of epigenetics; even Wikipedia makes the connection. Is the connection fair? Eh. There was so much more to Lamarck than this. I take it with a grain of salt:

In the most interesting paper (in my opinion), Elmer et al. show that morphologically distinct populations of cichlids in Nicaraguan crater lake Lake Apoyeque shared a common ancestor just ~100 years ago. You might recall cichlids as a textbook example of adaptive radiation in the African great lakes. There is an amazing array of different morphologies and habits among these African cichlids, all of which arose very recently and very rapidly. In Nicaragua, there are two morphologically distinct types of Amphilophus cf. citrinellus (see above): one with thick lips and one with thin lips. Despite this distinction, Elmer et al. found very little genetic differentiation in 11 microsatellites and mtDNA sequences, which is consistent with a very, very recent genetic divergence. They conclude,

Based on our findings of eco-morphological variation in the Apoyeque Midas cichlids, and known patterns of adaptation in Midas cichlids in general, we suggest that this population may be in a very early stage of speciation (incipient species), promoted by disruptive selection and ecological diversification.

I might add the important note that this is happening in a sympatric environment.

I've often wondered if species diversification permanently ended after the Flood or whether it's just latent. I used to believe the former, but I am becoming more and more convinced that it's the latter.