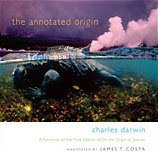 I suppose it would be presumptuous of me to review Darwin's Origin of Species, but it seems fitting to kick off Darwin week by looking at a new edition of Origin. This year, Harvard University Press released The Annotated Origin, a facsimile of the first edition with new notes by James Costa. Costa is a professor at Western Carolina University and director of the Highlands Biological Station in North Carolina. According to Frederick Gregory's review in BioScience, the book is the result of Costa's course on Origin, which he has taught now for a decade (Gregory also highly praises Costa's work).

When Darwin was surprised by Alfred Russel Wallace's independent formulation of natural selection in 1858, he dropped the extensive manuscript he had been working on (about half finished at the time) and wrote instead a 450-page "abstract" of his theory of evolution by natural selection. OK, 450 pages is a little more than just an abstract, but Darwin intended to revisit his theory with an expanded work that would include more evidence and the citations that were omitted from Origin. Although he developed several themes from Origin in other books, Darwin never completed the extended and fully referenced book on evolution that he intended.

Costa's Annotated Origin goes way beyond just filling in the missing citations. Costa also offers historical and biographical details that illuminate Darwin's arguments. He often gives updates to Darwin's arguments, both from Darwin's own lifetime (like the controversy over his swimming bears on p. 184) and from results of recent modern research into the same subjects. Costa opens the book with a very helpful account of the origin of Origin. The book concludes with an essay on how Darwin revised the Origin, a bibliography, short biographies of individuals mentioned in the book (arranged alphabetically), and an extended index.

I've always required the students in my "History of Life" course to read Origin, and now I think I've found the definitive version that we'll use from now on. I hope Harvard keeps this book in print for many years to come.
darwin