September 21, 2009
Quite a while back, Steve Matheson posted an interesting item and challenge on his blog about the Notch protein. His post gives a lot of detail on Notch itself, so I won't cover it again here but instead just rehash the basics. There's a protein called Notch that is used in cell-cell signalling during embryonic development. It's found in flies, jellyfish, sea urchins, humans, frogs, and many other critters. Steve asks the important question, "Why does every animal use Notch?" He gives three options: (1) It's the only functional option, (2) It's historical contingency, (3) It's the personal preference of a designer. He rules out (1), since Notch's function is so simple it could be done by many different proteins. It's like a key & lock; no need to use the same key in every lock. Option (3) would require some knowledge of the designer and the designer's preferences, which ID is notoriously unwilling to hypothesize on. Steve prefers option (2): "The earliest animals settled on this choice, and their descendants have used it ever since."

There's one point in his post that I want to clarify. He wrote, "Here's what is surprising. The same Notch proteins are used for this purpose in every known animal." That's not exactly correct. Oh sure, I've said the same kinds of things over and over, so I know what he means. When we talk about different critters having the "same" proteins, we mean that they have homologous proteins. They're not necessarily identical in terms of their amino acid sequences, but they share a particular kind of similarity that makes them basically "the same." We call this similarity homology.

To illustrate how this works, I've created a sequence alignment of some Notch proteins (from mouse, human, frog (Xenopus), fruitfly (Drosophila melanogaster laevis), sea urchin (Strongylocentrotus purpuratus), and the jellyfish-like hydra (Hydra vulgaris). In the alignment, different amino acids (the building blocks of proteins) are represented as letters of the alphabet. Looking at the mouse and human sequences at the top, you can see that they are identical for this segment. That means that for this segment of Notch, mouse and humans really do have "the same" Notch.

Comparing the frog Notch to the human/mouse Notch, we find a few differences. In the first position of the alignment, the frog has a serine where the mammals have a proline. There are two other differences (at positions 21 and 48 of the alignment), indicating that the frog's Notch is only 94% identical to the mammalian Notch (47/50 = 94% identical). The fly's Notch is even less similar over this segment (42/50 = 84% identical). Most dissimilar are the sea urchin and hydra sequences, at 60% and 44% identical respectively for the illustrated segment.

You'll notice looking at those numbers that they seem to form a kind of pattern. Most simiar to humans is the mouse (a mammal), then the frog (a fellow vertebrate), and then the invertebrate animals. The similarity in Notch is roughly the same similarity that you would see at the anatomical level. In this set of organisms, humans are most similar to mice, then to other vertebrates like frogs, then to invertebrates.

Now, here's the kick: There's no functional reason for Notch to show this kind of similarity. As Steve points out, it's just a lock-and-key mechanism role that it's performing. All animals could truly have identical Notch proteins, and they would work fine. Or animals could have Notch proteins that have a random bunch of differences. They would still work fine. Instead, what we find is a set of proteins that have a very particular pattern of similarities, a pattern that is very easy to explain if the Notch proteins evolved like this: 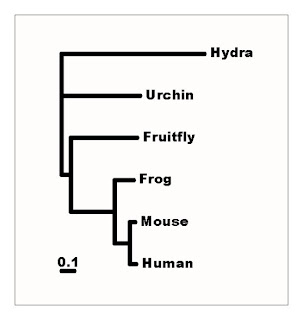 In this diagram, the evolution of Notch begins on the left of the diagram. As the species evolve, different copies of Notch in different species (different branches of the tree) accumulate different mutations. The later that species diverge, the less time there is for mutations to accumulate. In the present, creatures that diverged recently have Notch proteins that are very similar, and creatures that diverged in the more distant past will have Notch proteins that are less similar.

How can a creationist explain this? At present, not very easily. There have been some attempts at refuting these patterns, but they are not very convincing. Looking back at Steve's explanatory options, I reject the notion of functional requirement and historic contingency, so that leaves the preference of a designer. The question is why? For what purpose did God arrange Notch proteins in that particular pattern?

At this point, someone usually raises the idea that God would be deceptive if He created things to look like evolution if they didn't really evolve. There's lots of responses to that, but I'm going to stick to the theme and think more carefully about proteins. The truth is that the neat, clean pattern above is something of a rarity in protein homology. More often than not, the pattern of similarities observed in proteins does not make much sense in terms of organismal evolution.

For example, most animals have more than one Notch protein, each with a set of amino acids that differ from the others in the same organism. This can be explained post hoc as the result of gene duplication, and that's not an unwarranted explanation. Other proteins simply don't give sensible evolutionary patterns, and those might be explained by different rates of protein evolution, either in different species or proteins or even parts of proteins. That's also not entirely unreasonable, since we can observe within species the occurrence of mutations more frequently in certain stretches of DNA. And when all else fails, chalk it up to "noise," the randomness of mutation.

I don't want to discredit these explanations of protein homology and similarity, since I think they're all reasonable. But overall, when the exceptions become the rule, maybe we should be rethinking the rule itself? Maybe the fact that proteins occur in multiple copies in the same organism or don't form a very evolutionary pattern is telling us something about what these similarities mean. Maybe the key to understanding protein homology is not the fact that a select few sequences can make evolutionary trees. Maybe God's trying to tell us something in these similarities?

What we creationists need now are fewer people taking potshots at the homology argument and more people working to figure out what homology actually means. In the meantime, I think Steve's got a good point.
research