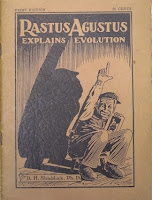 While I was home for Christmas, I visited my favorite antiquarian bookstore in East Lansing to find that it had been remodeled to about half the size it used to be and the bookstore cat died last year. Bummer. Then I found Rastus Agustus Explains Evolution, a first edition in pristine condition, and that sort of made up for the lack of a kitty rubbing against my leg while I browsed. RIP, Moe the cat.

Rastus Agustus Explains Evolution (1928) was written by B.H. Shadduck, an Ohio pastor and author of such bizarre propaganda classics as Puddle to Paradise and Jocko Homo Heavenbound. Rastus Agustus has to be one of the worst antievolution pamphlets I've ever seen. Imagine Jack Chick's Big Daddy, only a thousand times more tasteless and offensive. Rastus included an advertisement for other pamphlets written by Shadduck, wherein he described Rastus as

the funmaker of the series. It is a dialogue chiefly in Negro dialect and the tangles that poor Rastus gets himself into, invite you to read it twice; the first time for entertainment; the second time to consider the unanswerable philosophy back of the fun.

Yes, that's right, folks, it's a bunch of incomprehensible antievolution arguments mixed with outrageous racist stereotypes. I'd like to think that this is the absolute nadir of antievolutionism, but I've learned never to be surprised at how bad vintage antievolution propaganda can get. Don't even get me started on Theodore Graebner...

So how is Shadduck's argument? Like I said, incomprehensible. Here's a snippet from page 1 (mercifully stated without the racist "dialect"):

Does time flow past us or do we flow through time? If both flow together, then what is past time or future time? Is the FUTURE a thing before it is PRESENT or is the PAST anything after it has gone? Since even a split second is made up of what has not arrived and what has passed, what is the PRESENT?

I'm speechless. I'm completely flabbergasted by his argument. I wish I could even explain what Shadduck thought that was supposed to mean, but he doesn't really say.

Why in the world would I want anyone to even know about this shameful dead end in the history of creationism? Because even arch-antievolutionist George McCready Price disparaged Shadduck. Yes, the guy who gave us "Flood geology," who supposedly inspired the modern creationist movement (according to Ron Numbers, but I have my doubts), the guy who absolutely hated evolution. That George McCready Price.

I think Price's assessment of Shadduck reveals something that I've known for a long time: All "creationists" aren't created equal. I remember being at a conference about thirteen years ago, where I overheard a conversation at dinner. One person was describing a particular creationist hypothesis that had never been popular with creationists, and he declared, "These people just drew a line between two points and insisted that it explained the age of the universe. That's how creationists are!"

Let me be blunt: that's just stupid. Creationists have never been a uniform, single-minded group. There are, in fact, many different ways of classifying them. One way I especially like is the distinction between antievolutionists and creationists. Antievolutionists are just out to destroy evolution. They really don't care what the truth is, just as long as it isn't evolution. Antievolutionists produced an astonishing array of propaganda in the first half of the twentieth century, much of it appallingly bad. They're the ones who gave us the Scopes Trial.

This distinction is not sharp, of course. It's more of a continuum. I tend to fall on the far end of the creationist side of the continuum. Shadduck was on the opposite extreme and represents the true fringe minority. Price was definitely on the antievolution side of the continuum, but not nearly as far along as Shadduck.

In the meantime, if you happen to find any Shadduck pamphlets, whatever you do, don't read them! Just secure them tightly in a childproof container and send them to us at CORE. We'll lock them away in our rare book cabinet, where danger to the general public will be minimized.
books FTL library