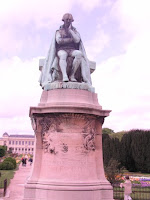 I'll never forget my first visit to the Jardin des Plantes in Paris. I had been reading a lot of Cuvier before visiting, and I naively expected that there would be some kind of statue to him in the park. I found two statues on the grounds: Buffon at the south end and Lamarck at the north. Cuvier was reduced to a single bust in the Gallery of Comparative Anatomy and Paleontology (well worth visiting, by the way). So much for the father of paleontology.

The statue of Lamarck is labeled, "Fondateur de la doctrin de l'evolution." (Of course, French pride certainly couldn't let Darwin have that title.) In the latest issue of Nature, however, Dan Graur, Manolo Gouy and David Wool published a review of Lamarck's Philosophie Zoologique on the occasion of the 200th anniversary of its publication. As my regular readers know, I am all for setting the record straight, but I have to admit that I found Graur et al.'s review a little hard to swallow in spots.

Not having read Lamarck myself, I can't comment on the two main claims of Graur et al.: that Lamarck did not believe in direct adaptation to the environment nor in adaptation in response to an animal's desire. I wouldn't be at all surprised if they were correct on those counts. What I did find surprising is their glowing description of Lamarck's contributions. They say he coined the term biology, but according to my recollection (and the much more reliable OED), the term biologie came to us from Treveranus in 1802 and was adopted by Lamarck the same year.

Graur et al. also strangely include among Lamarck's "concepts that are central to modern evolutionary thought" the following idea:

that it [evolution] generally progresses from the simple to the complex, although in a few cases in proceeds in reverse

Yikes. YIKES! I thought the idea of progress (though central to the development of evolutionary theory) was anathema to modern evolution. The variations that drive evolution are not directed towards any goal nor is adaptation. Wouldn't progress be teleological? Or am I missing something?

The strangest contortion Graur et al. indulge in is the peculiar insistence that Lamarck "proposed the first scientific theory of evolution." They think they get away with this by discounting authors who did not write "about evolution directly" (e.g. Buffon) or those who failed to use "scientific terms" (e.g. Erasmus Darwin). That smacks of triumphalism to me. There were plenty of authors who speculated on evolutionary origins of species prior to Lamarck, but since they don't meet our modern standards of "correctness," we'll give the title of "Fondateur de la doctrin de l'evolution" to Lamarck. Seems awful iffy to me. Caveat emptor.