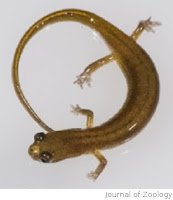 Sometimes, I wish I were a little more observant of my surroundings. Back when I first arrived at Bryan, there was a new species of plethodontid salamander described from the Cumberland plateau, which is literally in my back yard. It was just a cryptic species from the mountain dusky species complex (Desmognathus abditis for those in the know), so I probably wouldn't have recognized it as a new species even if I'd found it.

In a recent issue of the Journal of Zoology, Camp et al. [PDF] describe not only a new species but a whole new genus that is very distinct from other plethodontids. They call it the patch-nosed salamander, with the tongue-twisting formal name Urspelerpes brucei (the genus means roughly "original cave crawler"). That's Urspelerpes in the picture above. According to Camp et al.'s phylogenetic analysis, this is the sister taxon to the entire Eurycea genus. Strangest of all? It was found in northern Georgia, which isn't exactly my back yard, but it's pretty close.

What does this matter to creation/evolution? I don't know. It's cool. It's just amazing that even with all we think we know about nature and creation, there are still things lurking out there that we never knew existed. It's both humbling and exciting. I'm humbled by our ignorance and excited by the prospect of new discovery. That, and plethodontid salamanders are neat.