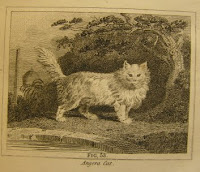 I picked up a copy of Buffon's Natural History (the Barr translation from 1797) for the CORE library recently. I've already enjoyed flipping through the volumes, but I was surprised to read his opinion of the ordinary house cat (from vol. VI, pp. 1-2):

The cat is a faithless domestic, and only kept through necessity to oppose to another domestic which incommodes us still more, and which we cannot drive away; for we pay no respect to those who, being fond of all beasts, keeps cats for amusement. Though these animals are gentle and frolicksome when young, yet they even then possess an innate cunning, and perverse disposition, which age increases, and which education only serves to conceal. They are naturally inclined to theft, and the best education only converts them into servile and flattering robbers; for they have the same address, subtilty and inclination for mischief or rapine. Like all knaves they know how to conceal their intentions, to watch, wait, and choose opportunities for seizing their prey; to fly from punishment, and to remain away until the danger is over and they can return with safety. They readily conform to the habits of society, but never acquire its manners; for of attachment they have only the appearance, as may be seen by the obliquity of their motions and the duplicity of their looks. They never look in the face of those who treat them best and of whom they seem to be the most fond, but either through fear, or falsehood, they approach him by windings to seek for those caresses they have no pleasure in but only to flatter those from whom they receive them. Very different from that faithful animal the dog, whose sentiments are all directed to the person of his master, the cat appears only to feel for himself, only to love conditionally, only to partake of society that he may abuse it; and by this disposition he has more affinity to man than the dog, who is all sincerity.

Huh. So he accurately described all the cat's best qualities but still concluded that cats are despicable? How strange...

(You can tell I'm not a dog person.)
fun