From the Library: Evolution, Creation, and Science

I first read Frank Marsh's Evolution, Creation, and Science about nine years ago, and I was amazed. I kept thinking to myself how "mature" it was, by which I meant that it seemed advanced for a book more than 50 years old. I'm not sure if that's a testament to Marsh's abilities or a commentary on the state of creationist biology at the time.

The book is by no means perfect, however. Marsh has more than one agenda here, and sometimes those agendas clash. He tries to be naturalist, apologist, and Bible scholar all at once, sometimes leading to puzzling and contradictory claims. Overall, however, the book was an influential step in the development of modern creationist biology. In my own book Understanding the Pattern of Life, I portrayed Marsh as a great innovator. Having done a lot of reading since then, I now see Marsh as a synthesizer of past ideas.

One such idea was the notion that "after its kind" meant some kind of reproductive isolation of kinds. The idea appears in nineteenth century commentaries, and it is employed against Darwin's notion of the evolution of species. After all, the Bible teaches that species only reproduce after their own kind. (I should note here that "after its kind" in Genesis 1 has nothing to do with reproduction but rather with creation.)

Another idea that had been suggested from time to time even before Darwin was the possibility that species were not the originally created kinds. For example, English plant hybridizer and clergyman William Herbert believed that the genera were the created kinds and that modern species had developed from them.

One final idea was the idea of fixity or essentialism, the concept that creatures belonged to their species because they posssessed an immutable essence that made them that species. This became a philosophical tenet of biology before Darwin, even though a small minority questioned species fixity. 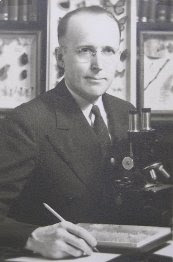 Marsh put these together into a more or less coherent whole. He explicitly denied species fixity and insisted instead that real speciation had occurred. He did not, however, accept unlimited evolution. Instead, he believed in a higher category of organism that was fixed. This category he called the "created kind," "Genesis kind," or baramin (from the Hebrew bara create and min kind). How could you know if two species belong to the same created kind? If they were able to produce a hybrid offspring (like a liger or zorse), then they belonged to the same kind. Why? Because of that Biblical "after its kind" phrase that (supposedly) limited reproduction to within kinds. Instead of employing "after its kind" as merely an antievolution tool, Marsh surmised that species that could hybridize must have descended from a common created kind.

Though the book is not perfect, it's still well worth reading. It's also not difficult to find, even though it's been out of print for 60 years. Check out the selection at LNF books.
baraminology FTL library