May 20, 2009
For those just joining us, "From the Library" spotlights interesting items in the library of the Center for Origins Research at Bryan College.

Several years ago I began a project to study the history of creationist thought regarding the origin of species. My aim was to understand how Frank Marsh arrived at his ideas about "created kinds." That work led me to a number of obscure and now poorly-known books on the subjects of creation and antievolution. One of those books was Evoluion Criticised by T.B. Bishop, described on the title page as "Member of the Council of the Victoria Institute." Evolution Criticised, published in 1918 in England, was a peculiar work that consisted largely of quotes from evolutionary literature with very little overriding organization. Bishop cited Erich Wasmann's view of species favorably, but otherwise concentrated almost exclusively on trying to document disagreements between evolutonists themselves (a very typical antievolution strategy even today).

So who in the world was T.B. Bishop? And why did he write this book? After some digging around, I found out he was the uncle of Aleister Crowley and that his life was the subject of a book called T.B.B. of the C.S.S.M. (Anonymous, 1923). On Monday, I finally got a copy of this truly hard to find book and read it through. The book was more a history of the Children's Special Service Mission (now the Scripture Union) than a proper biography of Bishop. There are bits of family history here, but the majority of the narrative is taken up by explaining how the CSSM grew from a few small children's meetings to an international publishing and outreach ministry. 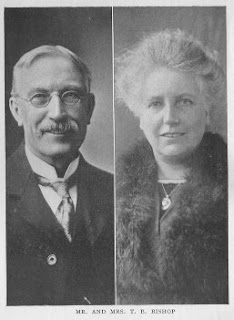 In brief, Tom Bond Bishop (1839-1920) was a farmboy from near Aldershot, west of London. Apart from two years of formal schooling as a child, he was entirely self-educated and successfully managed the family farm for several years after his father's death in 1854. Once the family debts were paid, he became a clerk at a custom house in London, a job he apparently held for many years. After his mother's and sister's deaths, Bishop married Sarah Caroline Dawson in October 1897. He was 57. Her age is not recorded.

Bishop's main activity discussed in the book is his work with the aforementioned CSSM. He served in various capacities with this ministry, most prominently as editor of the children's Our Own Magazine, published monthly beginning in 1879. By 1890, the CSSM reported 100,000 subscribers, and Bishop edited the content for slightly more than 50 years. The magazine included scripture and stories aimed at children.

Bishop began writing Evolution Criticised somewhere around 1909 or shortly thereafter in response to a growing lack of faith in the Bible:

What lay at the bottom of this attack upon the accuracy of the Bible? Reading scientific books as carefully as he did, T.B.B. was not at a loss to account for it. He saw that the doctrine of evolution was believed in to excess, and in some instances prematurely. (p. 135)

Bishop researched the book with "innumerable visits to the library at the British Museum" and attendance at lectures of the Victoria Institute. The manuscript was sent out of London for a time during the war and was eventually published in 1918. According to the unnamed author of T.B.B. of the C.S.S.M., Evolution Criticised "...makes evolution, as far as some of its theories are concerned, attack itself." Copies were sent to Sir Arthur Keith, among others, who according to the book, responded favorably - or at least politely.

Though T.B.B. of the C.S.S.M. is not a scholarly biography by any definition, I very much enjoyed reading it anyway. The stories of children eagerly learning about the Bible and the Savior ought to encourage even the crustiest Christians. It's also nice to know a little bit about what motivated the writing of Evolution Criticised and to put a face to the author.