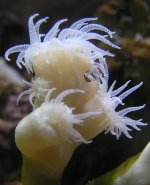 Anyone who knows me at all knows that I break down creationist biology into five main components: design, natural evil, systematics, speciation, and biogeography. I figure these are the five most basic components of pretty much any question about origins, and until we have a good handle on all five, answering specific questions will always be extremely tentative. I've decided to start posting some ideas about these five components from time to time. Perhaps you'll find that helpful, and maybe one of you will give me some helpful feedback.

Today, I was thinking about the origin of predators, animals that hunt and kill for their food. It's easy to fall into a sort of superficial confidence about predation. Look at bears, for example. There you have a baramin with species that will eat just about anything, and if you include the giant panda, then you have an obligate herbivore. It would be easy to say that predators are merely predators because of behavior. At the Fall, God just modified their behavior from eating just plants to eating meat. Or perhaps they figured out hunting later.

I like to start with that in my origins class, and lull my students into a false sense of security that predation is easy to explain. Then I hit them with much harder cases. Take venomous snakes. Every last one is an obligate carnivore, and they have those amazing fangs. The pit vipers have heat sensors that can detect their prey, then they take them out with a poisonous bite. The venom delivery involves modifications to the anatomy of the teeth and glands and to the biochemistry of the enzymes that are concentrated in the venom. It can't be reduced to just behavior. Snakes were designed to kill.

Jellyfish are even better. They're nothing but goo, tentacles, and a mouth. The tentacles have those delightful nematocysts on them. Nematocysts are amazing. Normally, they're a little pouch with a coiled wire inside and a little trigger (cnidocil) on the surface. When something comes into contact with that trigger, the coiled wire shoots out like a little harpoon, injecting their victims with poison. The victims are usually fish or some other aquatic critter, but as any unsuspecting swimmer can tell you, it's no fun brushing against one of these guys. If you're unlucky enough to be a fish, the venom usually dispatches you, and you get drawn into the jellyfish's mouth by the tentacles. Jellyfish were designed to kill.

I could go on and on with more examples, but you get the point. How do we explain all this design? Wasn't creation supposed to be "very good?" Weren't the animals given only plants to eat? Didn't death come to creation from the sin of Adam? How could things be designed to kill?

Actually, I don't think these things are that much of a problem. Sure, they're designed. The real question is when were they designed? What I think these things do for us is deepen our understanding of the Curse. Think about this for a second: How could the world we live in now exist without animal death? To be honest, it couldn't. Overpopulation alone would bring it to a grinding halt, not to mention the need for a completely different kind of ecological cycling of nutrients. And the list goes on. No, if the world before the Fall had no animal death, then it must have been very different from the world we live in now.

It follows then that the Curse wasn't merely some minor tweak to the original perfection. Whole components of creation had to be redesigned, and that redesign must have included predators. The more interesting question is not where or when predators originated, but how. What kinds of mechanisms did God use? Was it a direct intervention? Or was there some kind of pre-designed mechanism involved? That's a question that can actually be researched by studying predators and the attributes that give them their hunting skills. One of these days, I hope our research at CORE will help us to better understand where predators come from.
baraminology research