From the Library: Principles and Duties of Natural Religion

John Wilkins (1614-1672) is not the most famous name of the Enlightenment, but he made important contributions to the history of science and religion. He was a latitudinarian English clergyman during the tumult of the mid-seventeenth century England. He was also the first author to write an English language defense of Galileo in 1638 and 1640, in which he championed Galileo's doctrine of accommodation. He later helped found the Royal Society, of which he served as one of the first secretaries.

According to the doctrine of accommodation, God had to accommodate human ignorance when giving the Bible in order to clearly communicate salvation to all people. As a result, the Bible contains figurative and nonliteral language and cannot be used as a source of information in scientific debate. Galileo used the idea to argue against his opponents who claimed that the Bible taught a geocentric universe. In England, Wilkins's enthusiasm for the doctrine fit well with the growing popularity of Bacon's philosophy of prefering observation over authority for the discovery of knowledge. As the Royal Society began, Biblical issues were generally not allowed to enter the scientific discussions.

That is not to say that religion was unimportant to these early scientists. On the contrary, though Wilkins believed the Bible had nothing to say to science, he firmly believed that science could contribute to religion. In particular, he advocated the development of natural religion or natural theology, "which men might know, and should be obliged unto, by the meer principles of Reason, improved by Consideration and Experience, without the help of Revelation" (1675, p. 39). 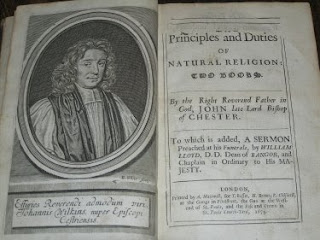 Published posthumously in 1675, Wilkins's Principles and Duties of Natural Religion was an early work of the natural theology movement. In it, Wilkins set out to construct a theology free from biblical input but which nevertheless contained not only the existence and attributes of God, but also the principles of living a moral life and the promise of an eternal reward or punishment after death. Strangely, he was not very successful, since the book is filled with scriptural references. The book is best viewed as a precursor to more famous works, like John Ray's The Wisdom of God Manifested in the Works of Creation, Robert Boyle's Disquisition about the Final Causes of Natural Things, and ultimately William Paley's Natural Theology.

While I agree in theory with the doctrine of accommodation, since the Bible is indeed full of imagery, I do not accept the application to which early modern scientists put it. To Wilkins, accommodation meant that any apparent conflict between the Bible and science was automatically decided in favor of science, and the biblical passage had to be reinterpreted as figurative (even if there was no textual evidence that it was meant figuratively). As a result, future generations would eventually reject most of the traditional beliefs about the six-day creation, the Fall and Curse, the global Flood, the tower of Babel, and the age of the earth. I believe that such conflicts must be decided much more carefully, with due respect given to the teaching of scripture. I don't believe that Christians ought to give automatic deference to science in matters upon which the Bible seems to teach clearly.